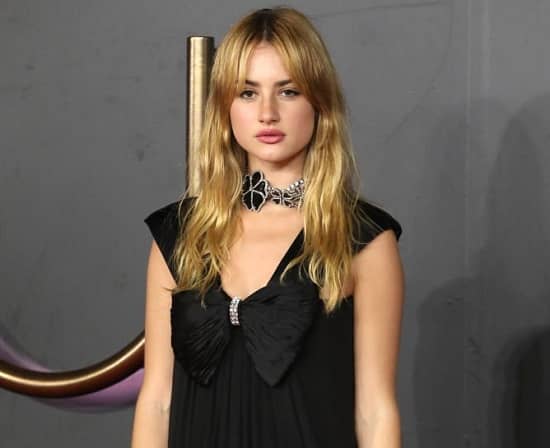 Grace Van Patten (born on November 21, 1996, age: 25 years) has become one of Hollywood’s most famous actresses of all time; it has been a short while since she made her debut.

Her fans already know that she brings a solid presence to the screen with her stunning acting style and grabbed her viewers’ attention many times by working in “Tramps,” “Central Park,” and “The Violent Heart.”

In 2022, Grace Van is back again in the headlines with her thrilling character, Lucy Albright, in “Tell Me Lies,” just like her characters, her personal life too is full of surprises. Let’s get to know her more. The 5 feet 7 inches tall actress Grace Van Patten took birth on November 21, 1996, in Tribeca, New York City, into a talented bunch of family; she is the eldest daughter of Timothy Van Patten, a well-known director and producer; some of his famous works are “Game of Thrones,” “The Pacific,” “The Sopranos,” etc., her mother, Wendy Rossmeyer Van Patten, was a model.

Grace’s grandfather, Bruce Rossmeyer, was the owner of several Harley-Davidson dealerships, currently run by her mother; her family doesn’t end her; she’s also the niece of famous comic actor Dick Van Patten, coming back to her immediate family, she has 2 younger sisters, Anna Van Patten and the youngest one’s name is not disclosed yet.

Seeing her whole family being a part of the entertainment industry, she wanted to do something else with her life; at that time, she was interested in sports and wanted to pursue it professionally, attending Poly Prep, which had a huge campus with all kinds of sports. Still, her parents asked her to try her luck and audition for Fiorello H. LaGuardia High School. To her surprise, she got in and completely fell in love with the fantastic teachers and the process of expressing herself through art.

Grace wanted to study theater at USC but took a gap year and began auditioning in New York; instead, she attended community college, where she learned psychology and philosophy with the hopes of going to college the following year, but things began to change once she got her first role. Practically, Grace began her career at the age of 8 as she spent most of her childhood on the sets of “The Sopranos,” as her father was the show’s director; he did help her a bit in getting an audition, but that was it, she bagged the role on her capabilities, got a small part in it, but the experience was tremendous.

She loved every bit of screen time she could manage; Van Patten then had to wait for nearly 6 years for yet other minor roles in “Law & Order: Special Victims Unit,” “Boardwalk Empire,” “Stealing Cars,” it was in 2016, that she got her prominent role in “Tramps,” it was from her people began to see her for what she was and not just a star being born into a famous family.

She was given back-to-back influential roles in movies like “Central Park,” “Under the Silver Lake,” “Good Posture,” “The Violent Heart,” and “Mayday,” she then bagged a Hulu series, “Nine Perfect Strangers,’ as Zoe Marconi, she was seen alongside a powerful cast, but still managed to shine, the cast included, Nicole Kidman, Melissa McCarthy, Michael Shannon and many more. Who is Grace Van Patten’s Boyfriend?

Patten was last known to be dating Nat Wolff, an actor and songwriter; she first posted a picture with him on December 18, 2017, wishing him happy birthday; the couple used to post quite frequently on their Instagram handles, wishing each other on occasions like anniversaries, festivals or birthdays, the posts have become less.

They last appeared in public together as a couple in 2020; it’s not clear whether they are still seeing each other or not. They have even done a movie together; he was Grace’s co-star in the film “Good Posture.” Ques: Who plays the role of Lucy Albright in Tell Me Lies?

Ques: What is Grace Van Patten’s net worth?