Jella Haase (born on October 27, 1992) is a 30 years old German actress. She began acting in theatre at a very early age. Her film credits include “Lollipop Monster,” “Dear Thomas,” and “Caged Birds.” Besides movies, she possesses experience working on the television shows like “Police Call 110” and “Tatort.” In 2012 she won the Bavarian Film Award in Best Young Actress Category, and not only that, but she also received the Günter Strack Television Award in 2013.

In 2022, she accumulated immaculate recognition after appearing in the Netflix series “Kleo.” The recently German Film Prize-awarded actress played the role of a Stasi agent Kleo Straub who is on a spree to take revenge on the people who betrayed her. Besides Haase, artists like Dimitrij Schaad, Julius Feldmeier, Marta Sroka, and Vladimir Burlakov are also part of this beautiful production. How Much is Jella Haase’s Age?

On October 27, 1992, Jella Haase (age 30) took birth at her parents’ residence in Berlin-Kreuzberg, Germany. Sources confirmed that her mother is a dentist. Here in this article, you will find some photos of Jella’s family that we found on the internet. The actress has a beautiful sister named Camilla.

Haase’s first encounter with acting was at the school theatre. In an interview, she revealed that her first-ever stage performance was during a musical drama named “Ritter Rost und Prinz Protz.” She also told during her performance; she was so frightened that her legs were shakingly badly.

Despite the fear, she fell in love with acting and kept learning it. While working on a short film named “Der Letzte Rest,” Haase randomly appeared for an audition and got selected to play the part of Sophie in a TV show titled “Liebe in anderen Umständen” that aired in 2009. After debuting in 2009, Jella became more serious about her acting career and connected with a talent manager to garner more opportunities. Luckily her efforts proved fruitful, and she roles in a few more projects like “Police Call 110” and “Mama kommt!.”

Haase proved that she could also play more prominent roles in 2011 when she took on the part of Svenja, a young woman who is slowly slipping into the neo-Nazi scene, for the film “Kriegerin.” 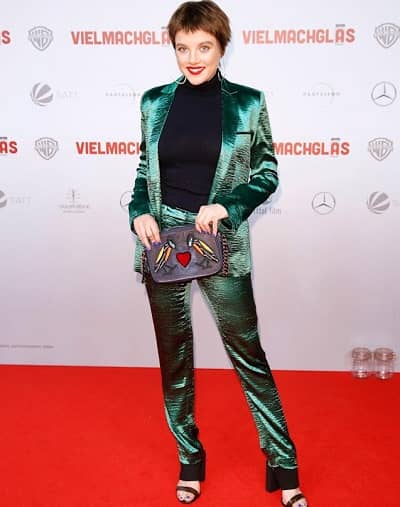 From there, her fame skyrocketed, and her name got added to the list of A-grade German actors. She kept doing more and more projects. It might not be wrong to say that Jella has worked on projects of all genres, including comedy, drama, action, and tragedy.

Most recently, her performance as “Mieze” in “Berlin Alexanderplatz,” which was released in cinemas in 2020, and in 2021 as the lover of the GDR writer Thomas Brasch in “Dear Thomas” attracted attention. No, Jella is not tied into a relationship. She also never talks about her romantic life, and there is not even a single instance where she attended any event with a man whom we could consider her boyfriend. She is an avid social media user, and 1.1 million+ people follow her on IG. The lady is a supporter of the LGBTQ+ community and also participates in protests which advocate fundamental human rights.

Ques: How old is Jella Haase?

Ques: What is Jella Haase’s nationality?

Ques: How much is Jella Haase’s height?

Ques: What is Jella Haase’s net worth?