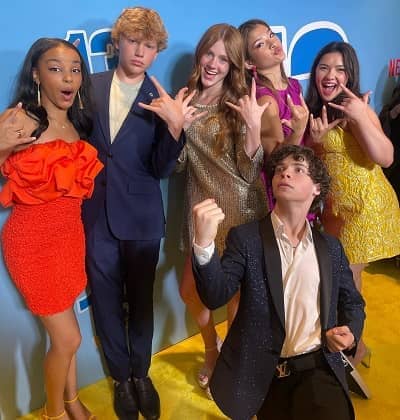 Khiyla Aynne (born on March 4, 2008) is a 14 years old Canadian actress and dancer who got famous after playing the role of Trish in the 2017 TV series “Ponysitters Club.” She started her career as an actress at the age of 9 with a TV movie titled “48 Christmas Wishes.” Besides shows, she has also worked on big-screen projects like “Work It,” “Kaira,” and “Nightbooks.” Aynne gained popularity in 2022 thanks to her role as Charlotte in the movie “13: The Musical.” In this production, young American actor Eli Golden played the role of a kid who came to NYC from Indiana after his parents divorced. In this project, director Tamra Davis filmed Khiyla alongside artists like Rhea Perlman, Josh Peck, Michela Luci, Frankie McNellis, and Asher Bishop. On March 4, 2008, Khiyla Aynne (age 14) took birth at her parents’ home in Toronto, Canada. Khiyla’s mother handles her social media handles and refrains from coming in front of the camera.

At present, not much data is available about Khiyla’s mom & dad, but we are making efforts. While searching for Aynne’s family, one thing that came to light is that the young actress has a sister named Jaidyn. From one of Khiyla’s Instagram posts, we learned that she and her sister attend an Ontario-based school named Boyne River Public School. At age 5, she started learning dance from a local academy.

She also used to participate in different dance conventions like Pulse Dance Convention. Slowly her interest shifted from dancing to acting. Just like many other actors, Aynne also did commercials first. At 8, she connected with Toronto-based da Costa Talent Management and began appearing for auditions. Luckily after some time, she got signed to play the part of Sherry in a TV movie that came in 2017.

When the production of Khiyla was going on, she received a call to appear in an audition for a TV series. The auditioners found Aynne delightful and picked her to lay the part of Trish in “Ponysitters Club.” In this series, the little Canadian artist got to work alongside Morgan Neundorf, Cailan Laine, Hugh Wilson, Madeline Leon, and Khiyla Aynne. With time more exciting opportunities came for Aynne. She worked on productions like “Kaira,” “Work It,” “Ponysitters Club: The Big Sleepover,” “The Move,” and “Holly Hobbie.” You might have also seen her with “Breaking Bad” actress Krysten Ritter in a horror movie named “Nightbooks” that came in 2021.

Ques: Who played Charlotte in “13: The Musical”?