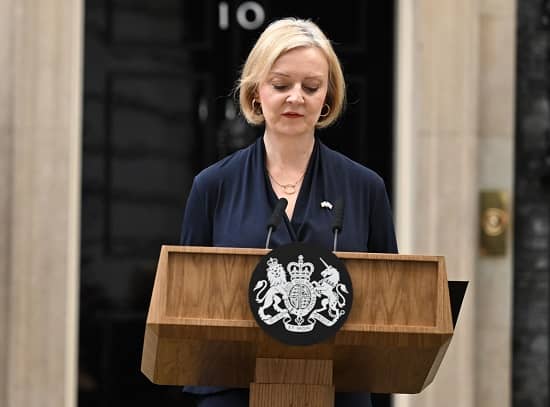 Liz Truss spent 12 years in Parliament before reaching the peak of British political power, and Liz has now become the shortest-serving prime minister in British history, having led the country for only 44 days.

As per Washingtonpost Liz Truss resigned as Prime Minister of the United Kingdom on Thursday after only 45 days in office, setting a new record for the country’s shortest-serving leader.

Truss was elected Conservative Party leader in September 2022, after a six-week leadership election triggered by the departure of Boris Johnson, and, in the Uk, History Liz became another Prime Minister who did not serve out their entire tenure.

The government presented an economic plan last month, the failure of which has resulted in economic turbulence and a political catastrophe. Apart from removing the Finance Minister, Truss was forced to backtrack several of her ideas due to this.

In the 2022 Uk PM election, Liz Truss took over the chair after Boris Johnson stepped down as Prime Minister. She defeated her rival, Rishi Sunak, in the election of Tory leadership by 20,927 votes.

Liz Truss’ government just presented a mini-budget in Parliament. She took measures in her budget to limit tax increases and inflation. However, the government quickly reversed these decisions.

When Liz Truss took over as Prime Minister, the British people, who were experiencing crippling inflation, had high expectations for her. One of the primary causes for this was Truss’s election campaign populist pledges to the population. A primary election promise that propelled her to the seat of power was a tax cut.

Liz Truss reduced taxes after taking office. However, she broke her election commitment on October 2. She reversed her plan to reduce business taxes. As a result of her choice, rebellious voices began to rise inside the party.

Liz Truss’ resignation as Prime Minister might be a “great opportunity” for Rishi Sunak. After the resignation of Truss, now the claim of Rishi Sunak has become stronger.