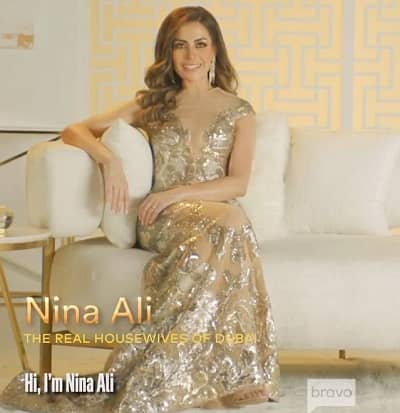 Who is The Real Housewives of Dubai Star Nina Ali?

Nina Ali (born on September 28, 1979) is 43 years old Lebanese businesswoman who runs an online bakery business and lives a lavish life in Dubai. She is also a social media influencer and has more than 520k Instagram followers. In 2022 this wealthy, beautiful lady became a TV star after appearing in the Bravo TV show “The Real Housewives of Dubai.”

It was a new experience for Nina, but she embraced it, and now even people outside Dubai know her. TROHD shows the extravagant lifestyle of married women in Dubai. Besides Nina, there are five more women in the show, namely Caroline Stanbury, Chanel Ayan, Caroline Brooks, Sara Al Madani, and Lesa Milan Hall. Many people want to know about Nina Ali’s source of income and how she manages to live such a luxurious life. We found that Ali’s Husband, Munaf, is Range Hospitality’s CEO. He used to be a Citi Bank executive and is now involved in the hospitality business.

He is the owner of the TR88HOUSE, a property spread over 65000 sqft, which includes an activity park and food course. Munaf also owns a luxurious hotel named 88 Terrace, located near Bluewaters Island.

Nina has her business also. She is the founder of an online bakery store named “Fruit Cake,” famous for selling high-quality fruit cakes. You can order from various available cakes and can get one as per your choice.

Life is like heaven for the members of the Ali family. They own beautiful luxury cars, and as per sources, Nina has a net worth of $35.8 million. Dubai’s reality TV show star Nina is married to a businessman named Munaf Ali. They both together make a lovely couple. Mr. and Mrs. Ali has a cute son named Ayan Ali (6) and a pair of daughters named Sophia Bella Ali (9) and Nour Ali (8).

The family resides in a beautiful sea-facing mansion in Dubai’s palm valley. Both husband and wife have a hectic daily schedule, so they do not get to spend much time with their kids; to compensate for that, they frequently plan trips to beautiful places like Maldives, South Africa, etc. On September 28, 1979, Nina Ali (age 42) took birth in Beirut, Lebanon at her father and mother’s house. The Lebanese-born girl was raised by her parents in Austin, Texas, USA. The data regarding Nina’s family is scarce so at present, it is not possible to tell the names of Ali’s mom, dad, and siblings. Nina spent her childhood in Texas and where she completed her schooling at a local Christian school. After high school graduation, she studied at the University of Texas and collected her bachelor’s in 1997.

Ques: Net worth of Nina Ali?

Ques: How old is Nina Ali?

Ques: When was Nina Ali born?

Ques: What is the name of Nina Ali’s husband?

Ques: How many kids Nina Ali has?