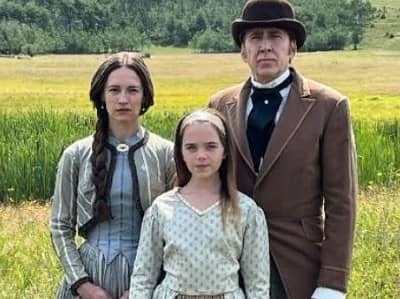 Ryan Kiera Armstrong (born on March 10, 2010) is a 12-year-old American actress who rose to fame in 2017 after gathering attention with her exceptional acting skills in “Anne with an E.” She was also in the blockbuster horror movie “It Chapter Two” alongside stars like James McAvoy, Jessica Chastain, Bill Hader, and Isaiah Mustafa. In 2022, this little Hollywood star stunned viewers with her performance in “Wildflower” and “Firestarter.” Currently, Ryan is being talked about because she appeared playing Brooke in Brett Donowho-directed action film “The Old Way.” In this Western-themed movie, Nicolas Cage played the role of Colton Briggs, an old gunslinger whose family faces a threat from the son of the man he murdered years ago. If you are looking for a movie packed with action and a powerful storyline, then go watch “The Old Way” in your nearest theatres. How Old is Ryan Kiera Armstrong?

On March 10, 2010, Ryan Kiera Armstrong (age 12) was born in New York, America. Her father, Dean Armstrong is an actor and her mother, Dr. Berta Bacic, is a dentist of Canadian origin. Ryan is the youngest child at home after 4 siblings. Following her father’s footsteps, she joined acting at 4 and learned acting at Armstrong’s Acting Studios. According to sources, Kiera gave multiple auditions before landing the recurring role of Minnie May Barry in “Anne with an E.” It was a family drama featuring Amybeth McNulty in the role of an orphan girl learning to navigate her life on Prince Edward Island. A little after her acting debut, Armstrong joined the cast of “The Truth About the Harry Quebert Affair,” taking her career to heights. A little after impressing everybody with her work in the TV industry, Kiera entered the big-screen business with a romantic comedy, “The Art of Racing in the Rain,” playing Zoë. It was a Simon Curtis-directed project featuring Milo Ventimiglia as an F1 driver named Denny, whose life changes after he learns that techniques used to succeed at the racetrack could be used to navigate through the journey of life.

From 2018 to 2020, she worked on a number of projects, namely “Benson,” “Athaliah,” “It Chapter Two,” “An Assortment of Christmas Tales in No Particular Order,” “The Glorias,” and “Wish Upon a Unicorn.”

In 2021, she starred alongside Scarlett Johansson and Florence Pugh in “Black Widow,” playing Young Antonia. The same year she appeared with Chris Pratt in the blockbuster movie “The Tomorrow War.” Undoubtedly she is one of the most talented young artists these days, and her work in productions like “The Old Way” is enough to back this statement.