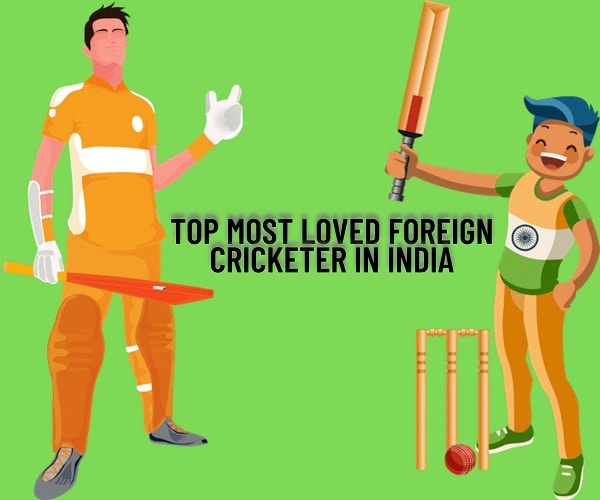 Friends, although cricket is played and liked in many countries, the crazies for cricket seen in India are not seen in any other region. Perhaps that’s why IPL, which is held every year in India, is celebrated as an occasion.

In India, the IPL is so well-liked that even foreign players participating in this league get so much fan support that they might not get in their country.

And today, in this post, we’re going to tell you about the 10 Top Most Loved Foreign Cricketers in India with the IPL 2020 update.

Let’s talk about Chris Gayle, the happiest and amusing cricket player in the world. Gayle is known worldwide for her exciting performance, which is why people call the Universe Boss.

Chris Gayle, who can bring the bowlers out of the batting line-up, is the most favored Jamaican batsman in the country, and that’s why Gayle has a lot of love in India.

Chris played his first IPL game in 2008, and then from 2008 to 2010, he was part of the Kolkata Knight Riders team; in 2011, he joined the Royal Challengers Bangalore team, yet in 2018 he returned to Kings XI Punjab. Joined the team, ever since then, he’s just been part of the team.

Gayle has scored 4 thousand 484 runs in 125 matches of his IPL career at an average of 41.14, including six centuries.

Glenn; The batsman whose capable of smashing every team’s bowling attack with his explosive batting.

Yeah, we’re talking about Glenn Maxwell, an Australian batsman. Maxwell is a batsman who has the potential to win even the most challenging matches on his own, and that’s why he’s so much in India.

Maxwell played his first IPL game for Delhi Daredevils in 2012, and since then, he has also played for Mumbai Indians, Kings XI Punjab, and Delhi Capitals, and Maxwell has scored 1,397 runs in 69 games of his IPL career.

In addition to his batting, he captured the hearts of the citizens with his valuable bowling and excellent fielding. And in 2020 IPL, Maxwell was purchased by Kings XI Punjab for a whopping 10 crore 75 lakhs.

Warner is the second Australian to be on our list. David is a left-handed opener recognized all over the world for his offensive portrait.

In the same way that he played, he captured the hearts of the crores of the citizens in the IPL. David Warner is the Sunrisers Hyderabad team captain team, and he has so much value in this team that the team’s victory depends heavily on that result.

In 2016, Sunrisers Hyderabad won their first IPL trophy under Whitener’s guidance, and in the early years of their IPL career, Warner played for the Delhi Daredevils team.

Since 2014, he has been part of the Sunrisers Hyderabad squad, and David Warner has scored 4706 runs in 126 matches of his ideal career with an average of 43.17 and a strike rate of 143, including four centuries.

He is one of the most famous international players to play in the IPL. De Villiers played his first IPL game for Delhi Daredevils in 2008 and became part of the squad for three years, and then in 2011, IPL gave Villiers the Royal Was to the Challengers Bangalore squad.

Maxwell played his first IPL game for Delhi Daredevils in 2012; he has also played for Mumbai Indians, Kings XI Punjab, and Delhi Capitals, and Maxwell scored 1,397 runs in 69 games of his IPL career.

Shane Watson is the third Australian player to be on our list today. Watson is currently one of IPL’s most prominent players.

He is one of the few overseas players who have played the first IPL in 2008 and now plays IPL 2020.

Watson won the hearts of millions of Indian fans with his all-around success at the IPL, and he not only contributed to the team’s win with his batting and his bowling.

He is the second most loved South African player to be included in the ranking. Tahir is 41 years old, but the love for cricket is still seen in this player; it is not seen in any young player. Imran Tahir is still the best bowler in the world with his leg break bowling.

Seeing how he dances running after he has picked up wickets, the whole crowd is packed with enthusiasm. Imran Tahir played his first IPL game for Delhi Daredevils in 2014, and he remained a member of the squad from 2014 to 2016.

He was included in Chennai Super Kings in 2018; it has remained part of Sears and mates; Imran Tahir has won 79 Wickets inT 55 IPL matches.

Anyone who wants to watch Kieron Pollard cricketers must have known Karen Pollard very well. This all-rounder wins the hearts of all with his phenomenal success and won Indian crores playing in the IPL.

In reality, Pollard is really fickle, and that’s why he’s always in the spotlight for something, and in the same way, he’s finished his ten years in the IPL when he’s in the news.

Kieron played his first match for the Mumbai Indians in 2010, and since then, he’s been part of the squad, which is an excellent thing in itself.

He scored 2755 runs in 148 matches of his IPL career, taking 56 wickets and winning many challenging games for the Mumbai Indians on his own.

Andre Russell is one of the most famous West Indies players in the world. In reality, Russell is a terrific all-rounder player who contributes equally to both his bowling and batting.

He remains a favorite of people worldwide as the Indian people due to his all-around success. In reality, Russell has a lot of people on the ground.

No matter how stuck the match is, he’s capable of reversing the game with his massive performance, and he’s finished eight years in the IPL, too, giving such an excellent output.

He played for Delhi Daredevils in the early years of his IPL, but he has been part of the Kolkata Knight Riders squad since 2014.

He scored 14 hundred runs in 64 matches of his IPL career at a strike rate of 186. He also named 55 wickets on his fast bowling.

Bravo is such an outstanding player on this list who belongs to the West In. Bravo is also one of the happiest and humorous cricket players in the W. Besidesides his excellent bowling and beating, he entertains people with his dance and music.

He’s possibly very much like in India because of his unique style. In reality, Bravo is a strong all-rounder who can transform the match against his batting and bowling.

He has been part of the IPL since 2008 and played for the Bravo Mumbai Indians in his early years, but in 2011 he was part of the Chennai Super Kings. Bravo has been an integral part of CSK today.

Buddies Bravo has scored 1483 runs in 134 matches of his IPL career, and the same fellow has also scored 147 wickets, and people call him names like DJ Bravo and The Champion.

New Zealand cricket team captain Ken Williamson is renowned worldwide for his classic bowling and excellent shots. He’s a player who has the burden of the whole team on his shoulders, and that’s why he’s still considered one of the most trusted players in the world.

Williamson is a very relaxed player, and that’s why he’s often called the cricket gentlemen. Because of these values, Williamson has rendered a vital spot in the hearts of Indian cricket fans.

He played his first IPL match for the Sunrisers Hyderabad team in 2015, and until today he’s still part of the side, and he’s also assumed captainship for the club. Ken scored 1302 runs in 41 tournaments of his IPL career, with an average of 38.2 in both.