Trevante Rhodes (born on February 10, 1990, age 32) is a recognized American actor who has managed to win several accolades and was recognized for his roles in “Moonlight,” “The Night Is Young,” “If Loving You Is Wrong,” “Burning Sands,” “The Predator,” and many more roles. 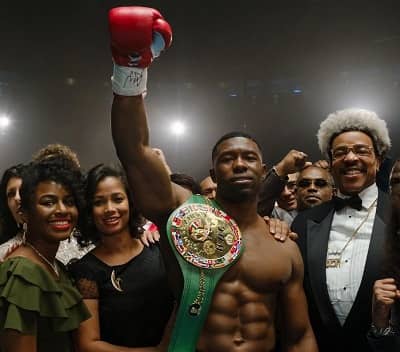 In 2022, Trevante has recently gained notoriety for his portrayal of “Mike Tyson” in Hulu’s new series “Mike,” which provides a glimpse inside the life of the contentious boxer. Rhodes captured all of the character’s highs and lows and gave credit to the riveting and complicated tale. Trevante Nemour Rhodes, aka Trevante Rhodes (born on February 10, 1990), was born in Ponchatoula, Louisiana, United States; his parents, Damour Dangelo and Jessi Rhodes, had to move to Little Elm, Texas, when he was just 10, he has a brother as well Giovanni Rhodes.

While studying in high school of Little Elm, Rhodes generated his interest in sports and began playing football as a running back in an option offense Trevante had Cole Beasley as his quarterback; throughout his high school, he received four letters in football and track and field, he became a specialized sprinter in 100 and 200m dash. In 2007, he ran for the University Interscholastic League and came second in both 100 and 200m; it was a Track and Field Championships held at the Mike A. Myers Stadium, but he sadly had to cut short his senior year due to an ACL injury while playing football, he still got into University of Texas at Austin with an athletic scholarship in track and field, where there he studied kinesiology.

He ran for the Texas Longhorns as a sprinter through the years 2008 to 2012, and it was in 2009 that he got a chance to help the US squad in Pan American Junior Athletics Championships that took place in Spain, Trinidad, and Tobago; Rhodes won a gold medal in 4×100 meters relay. Who is Trevante Rhodes’s Girlfriend?

Rhodes is officially off the market as he is engaged to his girlfriend, Mara Wright; however, the couple has yet to announce the news publicly. Still, a family member of theirs posted on Instagram with the couple in an embrace and Mara showing off her enormous diamond ring and “Congratulations” written below. Mara is a fitness model living in Los Angeles, and the couple engaged secretly without making much noise. Trevante completed his graduation and started his career as an actor; as he had no prior experience, he began working in minor supporting roles; and his first project was “Ingoma” after that, he did “Open Windows,” directed by Spanish filmmaker Nacho Vigalondo he was opposite Elijah Wood and had an uncredited role as Brian.

In 2015, Rhodes landed a TV series, “If Loving You Is Wrong” it was after this he was recognized and loved, but his career took off when in 2016, he got his breakthrough role in “Moonlight” as the adult Chiron nicknamed Black, it was a bold representation of what’s it like being a black gay man in America, the film won the Golden Globe Award for Best Picture – Drama, Rhodes was nominated for several awards for his role and won for Outstanding Breakthrough Performance.

After working in “Moonlight,” Trevante’s whole life changed because, after that, he was offered a position in the TV series “Westworld” and was featured in many movies like “Shangri-La Suite” “The Infamous,” “The Night Is Young,” “Burning Sands” “Smartass” “12 Strong” “The Predator” he was also seen in Netflix’s “Bird Box.”

Ques: When was Trevante Rhodes born?

Ques: What role does Trevante Rhodes play in “Mike”?

Ans: He plays the role of Mike.

Ques: What is Trevante Rhodes’s height?

Ques: What is Trevante Rhodes’s net worth?