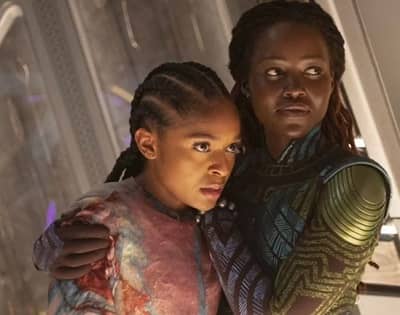 Dominique Thorne (born on May 11, 1997) is a 25 years old Brooklyn-based budding actress from NYC. Many people know her as Judy Harmon from “Judas and the Black Messiah,” a Shaka King-directed movie that won a total of 45 awards, including 2 Oscars.

She has been receiving constant media attention since joining the cast of “Black Panther Wakanda Forever,” the sequel of the 2018 film “Black Panther,” which did a collection of $1.348 billion worldwide. In “Black Panther 2,” Casting Director Sarah Finn assigned this New York native actress the character of Ironheart, aka Riri Williams. How Old is Dominique Thorne?

The 5 feet 5 inches tall actress Dominique Thorne (age 25) was born on May 11, 1997, to her mother, Nerissa Guy, and father, Navie Guy, in East Flatbush, Brooklyn, New York. She has two brothers, KyMani and Caleb. According to sources, she has always been interested in performing, but it all started when she was 14. According to Newsday, her mom made her attend La Guardia High School of Music and Performing Arts for a month. She even studied at Manhattan’s Professional Performing Arts School for 4 years, where the young girl actually fell in love with acting.

Learning acting in school was very pleasant, but Thorne found herself in a conundrum when it came to choosing a college. She applied for scholarships at various universities/colleges, but in the end, Cornell University accepted her application to study human development. Thorne was still in school when she appeared for an audition and luckily got picked for a part in “If Beale Street Could Talk.” It was a romantic drama where Barry Jenkins filmed Thorne alongside stars like Regina King, KiKi Layne, Stephan James, Colman Domingo, and Ebony Obsidian. Viewers loved the movie, and it won more than 107 awards, including an Oscar.

A year after debut, Thorne got picked to work alongside LaKeith Stanfield and play Judy Harmon in the Shaka King-directed film “Judas and the Black Messiah.” The second project of Dominique also won an Oscar and did a hefty collection worldwide. Another hit in the career timeline of this Trinidadian-American actress got added in 2022 after the release of “Black Panther: Wakanda Forever.” People have been waiting for Black Panther’s sequel for a long time and showered it with love when it came out.

Thorne is of cheerful nature; she loves to be around her friends. While working on “Black Panther: Wakanda Forever,” she made many friends because of her welcoming behavior. The lady is also possessive about her family members and never forgets to bring them to movie screenings. Sources of ours have confirmed that she is currently single but if you want to stay updated about her personal life, then make sure to follow her on Instagram.

Ques: What is Dominique Thorne’s age?

Ques: How tall is Dominique Thorne?