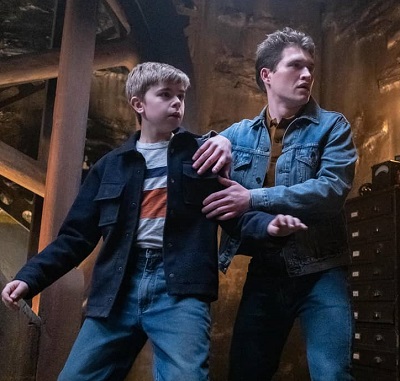 Who is The Hardy Boys Actor Alexander Elliot?

Alexander Elliot (born on December 8, 2004) is a 17 years old Canadian actor who is better known in the entertainment industry since 2020 for starring the role of Joe Hardy in “The Hardy Boys.”

The young guy Elliot has been in the entertainment industry since 11. He first joined a local theatre in Toronto and later connected with a talent manager to find acting jobs. If you are a fan of horror shows, you would have seen him in the Netflix fantasy show “Locke & Key” in a minor role. Alexander Elliot (age 17 years) was born in Toronto, Ontario, Canada, at his parents’ house on December 8, 2004. His mother, Rucsandra Schmelzer, is a former employee of CBC/Radio-Canada. Alexander is the youngest member of the family as he also has an elder sister Rucsandra Schmelzer who recently completed her graduation.

Everybody knows Elliot as an actor, but he started his journey to become an artist as a dancer. He was six when the chance for him came to perform at Charactors Theatre Troupe, a musical theatre for kids. While attending CTT, he performed around 100 times at Stratford Festival, which suns for seven months and is popular in Ontario. Later he joined The Musical Stage Company, again based in Toronto.

After years of training and practice, the chance to work on a more significant project came for Alexander in 2018 when he was 14. It was a TV show named “Odd Squad,” and his role was of Agent O’Que in a single episode titled “Where There’s a Wolf, There’s a Way/New Jacket Required.”

It did not take the next chance to appear for Elliot as the very next year; he got cleared auditions for “Detention Adventure.” At the start of his career, the roles that he did were minor, but the young kid was grateful. In a TV movie named “Trapped: The Alex Cooper Story,” the Canadian kid portrayed the character of Spencer. The film was based on a story where a teenage girl gets sent to a therapy center when she reveals to her parents that she is gay.

After doing a few more minor roles, in 2019, Alexander finally received a call from his agent at AMI Artist Management that “The Hardy Boys” casting director wanted to cast him in their production. And this time, it was not for a minor role but for one of the main characters named Joe Hardy. Knowing the value of the opportunity, he tried to make the best out of it and aced the role.

In 2022 he got awarded Best Acting Ensemble by the World Indie Film Awards for the role of Beckett in Joffre Faria Silva’s short movie “Being Brave.” Ques: Nationality of Alexander Elliot?
Ans: He is Canadian.