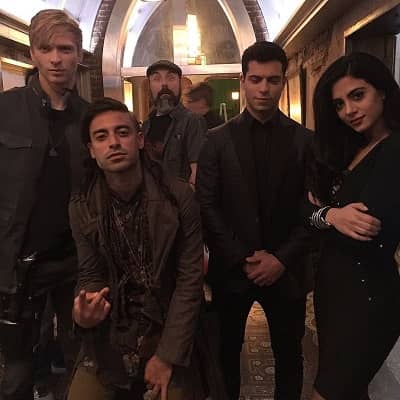 David Castro (born on February 7, 1996; age:26) is an actor commonly known for the part he played in the famous TV series “Shadowhunters” that aired between 2016 and 2019. he has also done movies, including some major projects like “Bella,” “27 Dresses,” “The Ministers,” and “Ruta Madre.”

In 2022, The 5 feet 9 inches tall Castro catapulted the new heights of the limelight after appearing as Marco Boselli in a Tv series called “Power Book III Raising Kanan.” It is a Starz show where the director Rob Hardy filmed David alongside actors like Patina Miller, London Brown, Malcolm Mays, Goya Robles, Shanley Caswell, and Hailey Kilgore.

Nowadays, on the one side, he has been gaining fame for “Power Book III Raising Kanan,” but David fans are also excited to watch him in Producer Kathy Castro’s forthcoming film “My Life Not Yours,” which will be expected to release the end of 2023. Who is David Castro’s Girlfriend?

Castro has been dating a beautiful girl named “Paige Chandler”. Some images depict that David has been maintaining a love relationship with Paige since 2015, and on August 6, 2021, David shared a photo on his Instagram handles, revealing that his girlfriend Paige Chandler is a medical student. On February 7, 1996, David Castro (age 26 years) took birth to a wealthy family in Long Island, New York, America. His father, Albee, is Puerto Rican, and his mother, Kathy Castro, is Italian. David has 4 siblings, of which 3 are his sisters (including Raquel) and a brother named Anthony.

At only 3, he joined an acting school and began appearing for auditions. Luckily in 2001, he got a chance to appear in Sponge Bob on Nickelodeon. A couple of years later, he landed a part in a movie named “Palindromes,” and his acting career took off. The following year he was approached for two films, “Little Fugitive” and “A Guide to Recognizing Your Saints.”

Although David was interested in acting as a kid, his mom used to worry that his studies would suffer, which is why she used to teach him herself. As Castro grew, his career also expanded. From movies, he started shifting to shows/series. He starred in Lev L. Sapiro’s “Summer Camp” in 2010, playing the part of a teenager named Cal Alarcon. By the time he graduated from high school, he had already appeared in 4 shows and 11 movies.

He faced a downfall in his movie career after 2014 and became part of only a few productions. On the one hand, where Castro’s film career was going downwards, on the other hand, his career as a TV show artist grew exponentially. After the success of “Shadowhunters,” he also played a significant part in “God Friended Me” and then in the 2022 super-hit show “Power Book III: Raising Kanan.”

Castro enjoys spending time with his family, which is why he does not handle multiple projects simultaneously. He leads a happy life involving his parents, siblings, and pet dogs. He does not drive flashy sports cars like most celebrities but owns a muscular Ford F350.

Ques: What is David Castro’s age?

Ques: From where is David Castro?

Ques: Who are David Castro’s parents?

Ques: How much is David Castro’s height?

Ques: What is the name of the artist who played Marco Boselli in “Power Book III: Raising Kanan”?